The Queen Of England And Husband Celebrate 73rd Wedding Anniversary 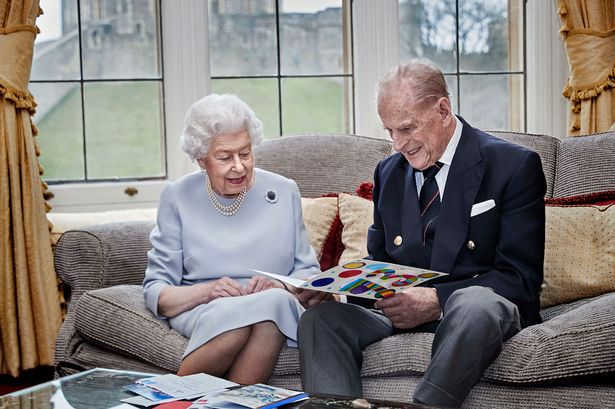 Queen Elizabeth II, the highly revered Queen of England is celebrating her wedding anniversary with her husband.
The Queen and her husband; Duke of Edinburgh, Prince Philip, are celebrating their 73rd wedding anniversary.
The royals have marked the occasion by releasing a photograph of them reading a card made by their great-grandchildren, Prince George, Princess Charlotte and Prince Louis, The Guardian reports.
The couple are pictured on a sofa in the Oak Room at Windsor Castle, where they are spending lockdown.
In perhaps a symbolic reference to their long marital union, the Queen chose to wear a chrysanthemum brooch, made from sapphires and diamonds set in platinum.
She wore the same brooch in photographs taken on their honeymoon at Broadlands in Hampshire, and again in pictures taken to mark their diamond wedding in 2007.
On their golden wedding anniversary, she paid very personal tribute to Prince Philip in a speech at the Guildhall in London, in which she said:
He is someone who doesn’t take easily to compliments, but he has, quite simply, been my strength and stay all these years.”
The royal couple has spent much time apart since Philip, now 99, retired from public engagements in 2017, with him living largely on the Sandringham estate in Norfolk while she remained at Windsor Castle and Buckingham Palace. But during the pandemic lockdown, the couple have been bubbled together at Windsor Castle.
The colourful card, with a pop-out figure of 73, was one of several anniversary cards and letters sent by well-wishers to the couple, with a small pile shown on a nearby table.
The Queen, 94, was a 21-year-old princess when she married Lieutenant Philip Mountbatten on 20 November 1947. Their enduring relationship has lasted the longest of any British sovereign.

Bobrisky Called Out By Man He Promised To Help

Baba Ijesha’s Rape Case: ‘This Is Going To Be A War’ – Tonto Dikeh