Right Or Wrong? Typing ‘Xmas’ Instead Of ‘Christmas’ – What You Should Know 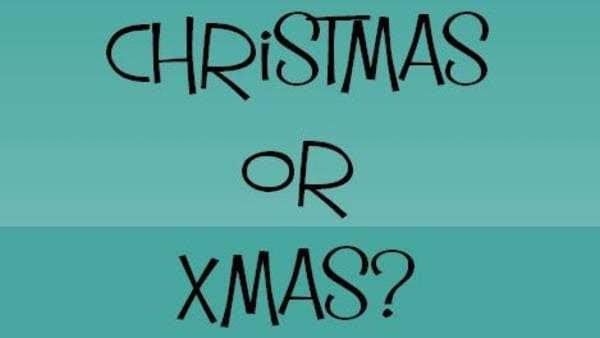 One thing I have always disagreed over the years is the insistence on ‘Xmas’ as many claims it is wrong to use it in place of Christmas, and many people especially Christians around us are of same opinion.

Well, I’m of the opinion that they are forever wrong, even though they do not explain why ‘Xmas’ is wrong.

Firstly, I agree that the word Xmas might abe partially informal i.e it shouldn’t be used in any official writing probably in an exam of any sort of bureaucratic ways. (Some even accept it). Of course 99% of abbreviations is informal.

But writing it on social media and in all informal ways is entirely right and no reservations should be held against it.

Firstly, Xmas is a perfect shortened form of Christmas worldwide, and nobody would ever fail to understand it in any context such as ‘I Wish You Merry Xmas.’

The word ‘Xmas’ unlike many abbreviations has a place in the dictionary which simply means ‘a short form of Christmas’.

That being said, grammatically, no autocorrect feature either on phone, Microsoft word, or any thing would ever underline Xmas as ‘incorrect’, which is also a signal and a pointer that it is not incorrect.

I’m not done yet.

I know the problem most of you have against the word is because it starts with ‘X’ which is of course used as a replacement for some unacceptable words that deals with ecstasy or obscene words. But X is just an alphabet that is also used for many good things, like using in place of artist(s) collaborations. E.g Davido x Tiwa Savage. X is even an informal way of spelling Christ. If I said ‘Jesus X is Lord’, it literally means ‘Jesus Christ is lord’.

Typing Xmas does not devaluate Jesus or Christians. It is however a sense of religious bigotry and unnecessary extremism to put such importance to something meaningless of such.

Conclusively, you need to know the word ‘Xmas’ as a form of synonymity for ‘Christmas’ is not coined by Whatsapp slay mamas typing’ What’s Up’ as ‘Xup’ or ‘I’m fine’ as ‘m 5n’.

The “-mas” part is from the Latin-derived Old English word for “Mass”, while the “X” comes from the Greek letter Chi, which is the first letter of the Greek word Χριστός, translated as “Christ”.

How on earth will someone now come in a day to say ‘Xmas’ is wrong especially when typing it in just social media?

Well, like my own religion (Islam) says: we should always seek knowledge even if it’s to go to the farthest part of the world, even till we leave this earth.

So there might be another reason ‘Xmas’ is not allowed to type and I’m open to know from anyone of such belief with reasons so I’d change my mindset towards it. No knowledge is a waste.

Do You Also Agree Christmas And Xmas Are The Same?

As a teacher, what's the darkest thing you've heard a student say?

Is It Advisable To Involve My Girlfriend In A New Business I Am About To Establish?