Kelly Rowland Wants You To Feel Fabulous While Working From Home 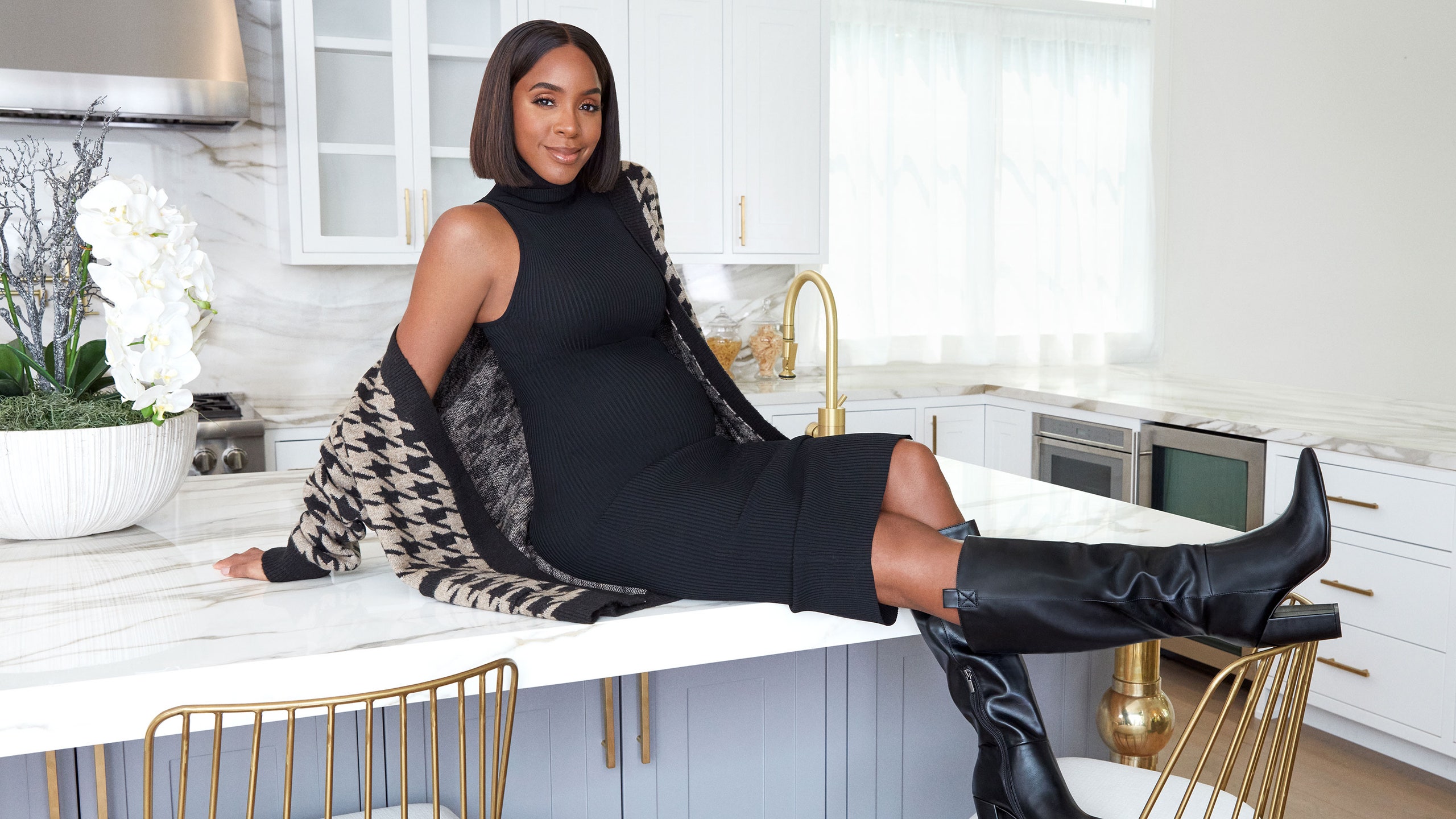 The last few months have been eventful for Kelly Rowland. As a singer, television personality, and one-third of the iconic girl group Destiny’s Child, Rowland is used to tackling multiple projects. Still, this week she’s delighted fans with three big announcements. On the heels of a newly released single, “Crazy,” which hit Spotify this morning, and the reveal of her second pregnancy with husband Tim Weatherspoon, Rowland dropped the news that she’s launching a capsule collection with JustFab. Though she stepped into the athleisure space last year with a fitness-focused range for Fabletics, Rowland’s latest designs tread new territory. Conceived as a modern wardrobe that offered style and affordability, Rowland set out to make women feel their best. “I think that everybody wants to be fabulous, but they want to be able to do that in a way that doesn’t break the bank,” she shared via Zoom. “Especially right now in these times that we’re living in.”

The pieces reflect Rowland’s essentials and a pragmatic take on getting ready. Though she’s apt to wear Iris van Herpen couture on the red carpet or Alexander McQueen while judging The Voice Australia, Rowland appreciates the ease of staples like oversized sweaters, skinny jeans, and flat riding boots when she’s at home. “I’m not as big on trends as I was when I was younger,” she explains. “I love classic pieces and understanding the value of having things in your closet that work for you long term.” Usually, investment pieces are synonymous with high costs, but during her conversations with JustFab CMO Daria Burke, Rowland realized she wanted to bring that concept to an accessible price point. “When we started getting into the studio and collaborating, we leaned on classic styles that made sense for women in quarantine,” says Rowland. “[Our woman] still feels stylish, but she’s comfortable; she isn’t going to hurt her ankles trying to get into a boot that is too high. If she’s doing the most, she’s doing it in her space and her way.” With a lineup that includes knits, leather pants, fitted blazers, boucle coats, and croc-stamped heels the collection provides plenty of opportunities to dress things up. 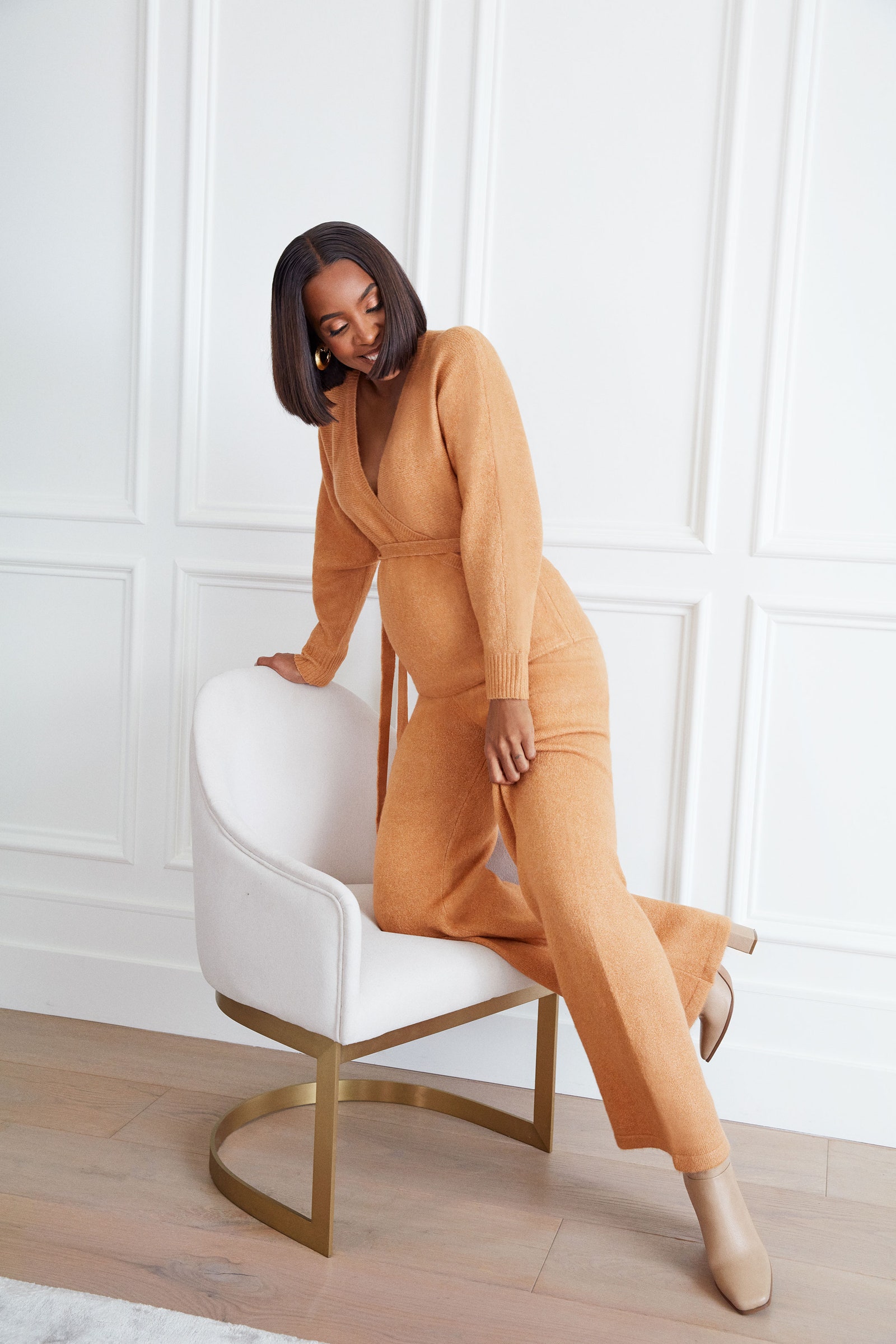 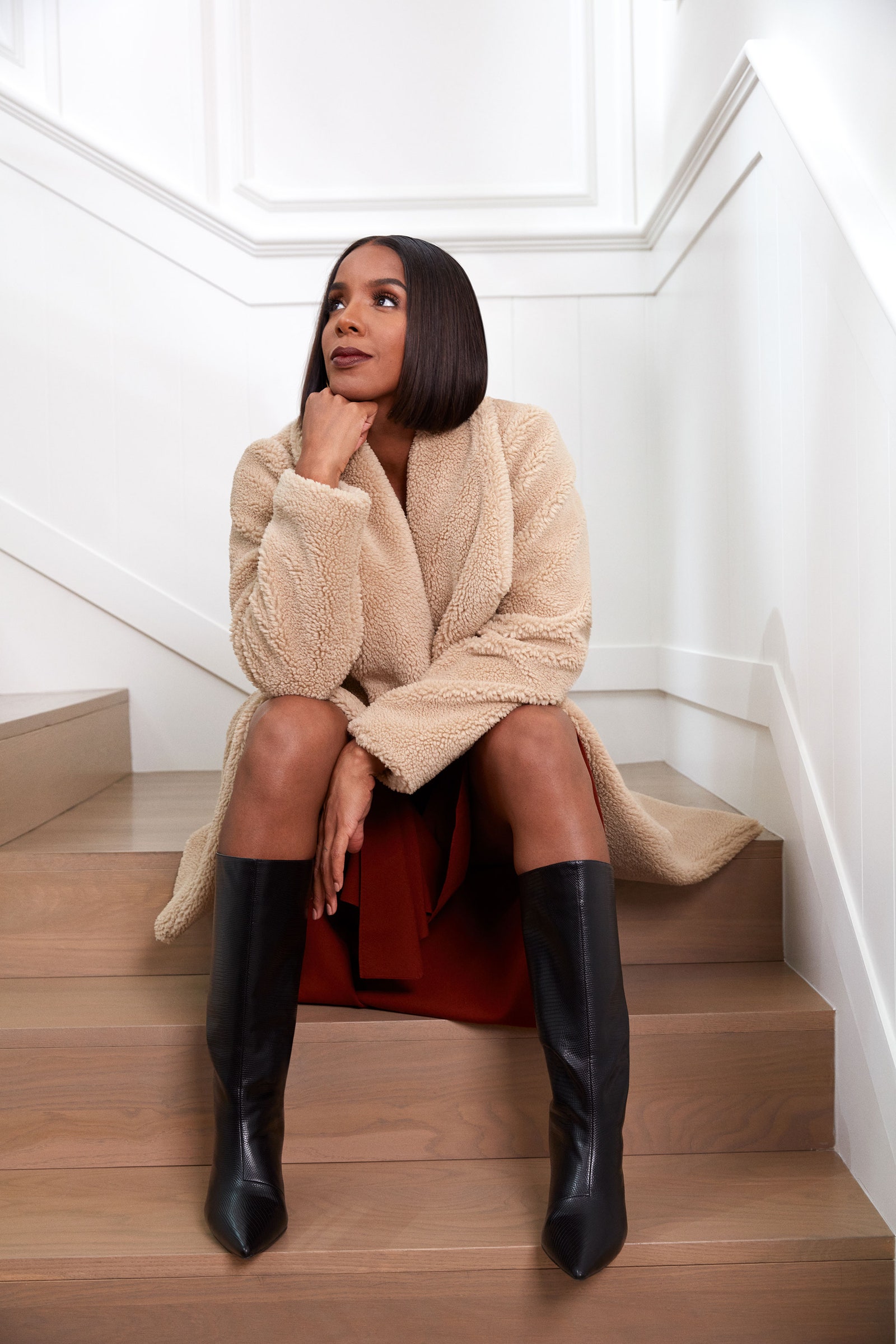 At present, work from home style is top of mind. No one wants to look overdressed on a Zoom call or sacrifice all the fun that comes with getting dressed up. As a runway devotee, Rowland has had to make a few adjustments to stay true to herself while stuck indoors. ‘I started noticing [the change], I said, ‘Oh boy, you’re not dressing up. Look at you. You got to get yourself together’” she says with a laugh. “I still wanted to feel cute [but] sometimes going to the grocery store was the only outing that I was having. I put all my clothes into sets, which is why we have a bunch of cozy sets within the collection. I added sweaters because sometimes you don’t want to wear a t-shirt or you need something to layer while you’re in the house.” With loungewear fatigue at an all-time high, the sentiment aligns with the wardrobe malaise many have complained about. In a year filled with worries, Rowland didn’t want her audience to stress out over fashion. “[Women] are already thinking about everything else going on the world, within their households, and how they’re going to balance this, that, and everything else,” says Rowland. “We wanted to take the worry out of it for her.”

Rowland’s take on fashion has always been about ease during off-days and all-out glamour for work. Currently expecting her second child and raising her 5-year-old son, Titan, motherhood hasn’t dampened her love of daring style. “I have, for some strange reason, wanted to be sexy this pregnancy,” she says. “I find that I’m wearing everything quite fitted. I have a vintage Bob Marley tees collection, and I paired one with my little ankle boots the other day. My assistant looks at me and says ‘Where are you going—you look like you’re headed to Coachella?’ I want to see the body, embrace all of the curves and splendor.” Naturally, the bold maternity outfits worn by her best friend and bandmate, Beyoncé, have been an influence. “B rocked her pregnancies so beautifully,” says Rowland. “I’ve been inspired by my girlfriends. I remember we went out for Mexican food one night while [Beyoncé] was pregnant and she was all dressed up. I thought ‘I’m going to do that next time because it looks like more fun.’ You’re already going through a lot, and your body is changing, so you want to have a good time while you’re doing it.” 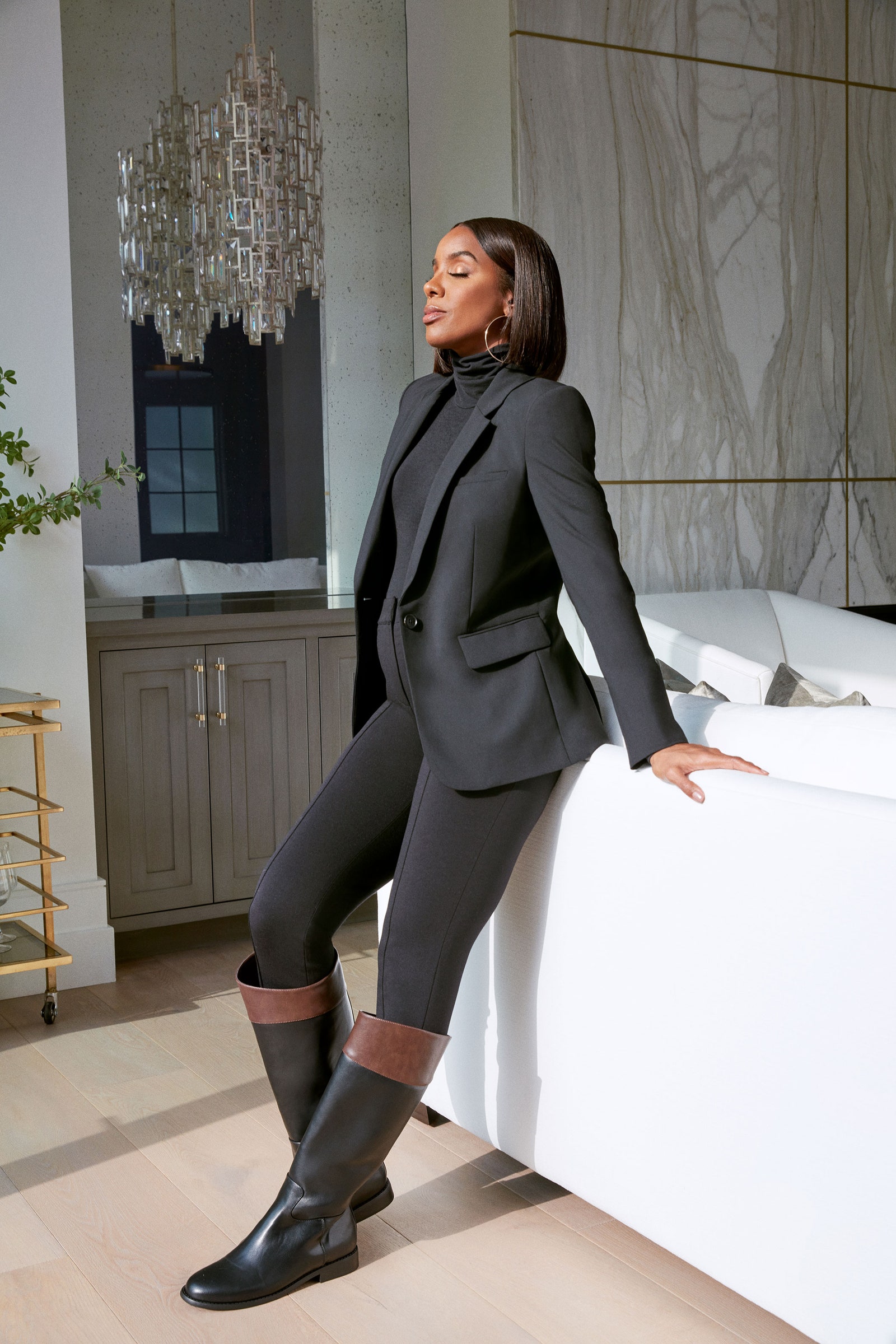 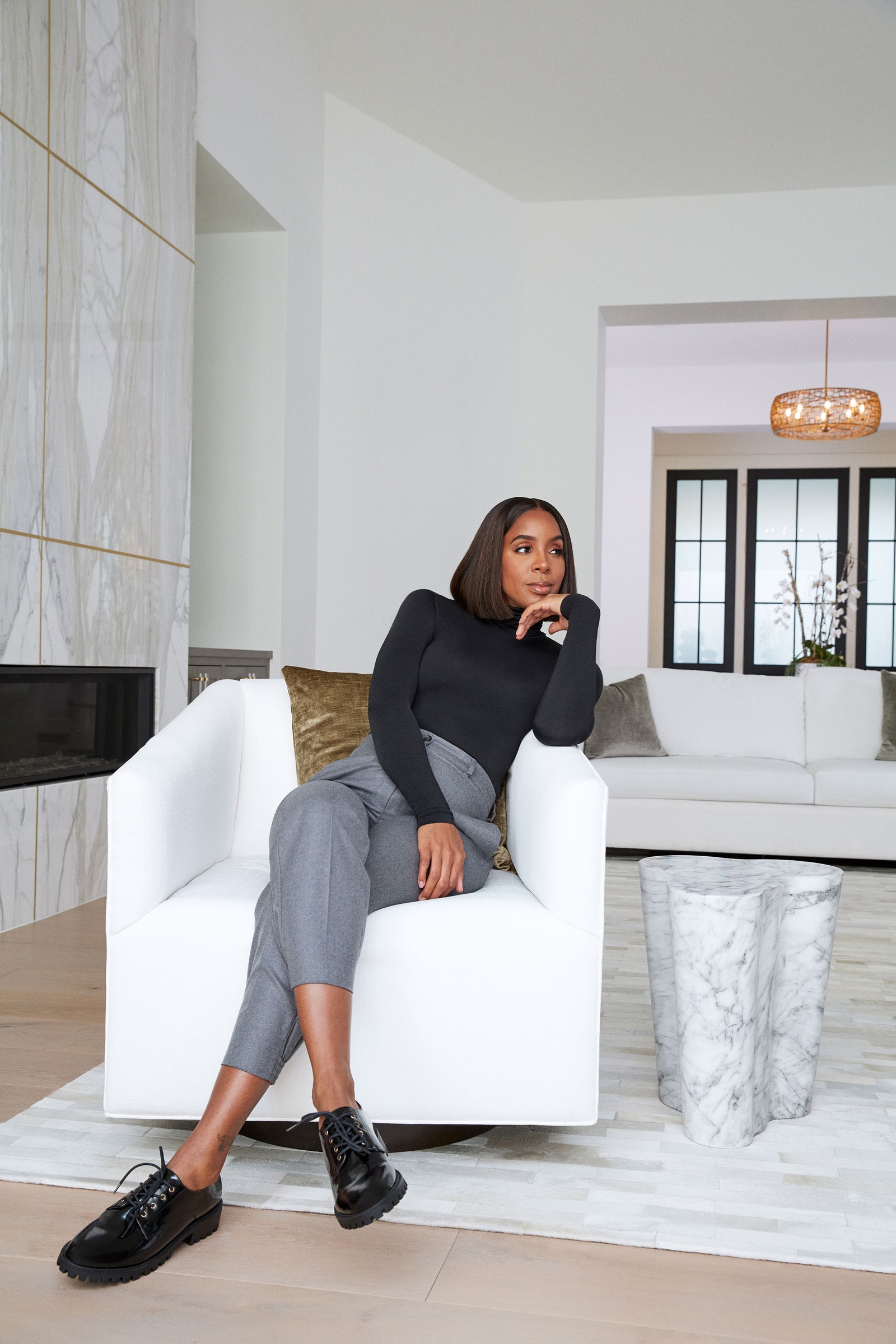 Rowland keeps her spirits high and her taste impeccable by heading over to YouTube to enjoy its wealth of ’90s runway videos or thinking back to some of her favorite experiences during Paris Fashion Week. “I’ll never forget going to an Altuzarra show and just loving everything I saw,” she says. “As I was watching, I said, ‘I think I’ll still love this in 10 years’ someone sitting next to me heard, and they were like ‘That’s how it’s supposed to be.’” The search for timeless pieces she’ll cherish for decades informs Rowland’s shopping habits. A fan of sites like 1stdibs and Philo-era Celine, she seeks out great vintage online. “I love my Celine striped suit, this great jacket from The Row that I got on sale,” she says of her favorite finds. “I notice that I’m starting to love the old ’90s pieces. There’s this vintage Oscar de la Renta top that I have. It’s sheer and so beautiful, but I barely wear it because I’m afraid of the sides unraveling!” Drawn to confident style icons like Bianca Jagger, Diana Ross, and Naomi Campbell, she understands the emotional impact fashion can have. “I remember seeing myself in Naomi as a kid,” she says. “I just wanted to wear everything she was wearing on those runways, and seeing her made me feel like I could do it. So when I see things that remind me of that era, it excites me; I want to buy them all!”

Rowland wants the women who wear her JustFab collection to receive that kind of boost each time they put on a piece she designed. Sharing the feeling of possibility and self-assurance a great outfit can provide was paramount. “I hope they feel seen and confident,” she says. “For them to know that we looked out for them. I hope that if there is a tough day, they can put these [pieces] on and it gives them a different stride. The whole purpose is to make women feel stronger and powerful.” To that end, she thinks back to the wisdom shared with her by one of fashion’s all-time greats, Azzedine Alaïa. “I’ll never forget having a conversation with him after I’d just had my son. [At the time] I was doing a lot of hiding my body and he told me I had to stop it,” she says. “I remember he picked up this beautiful animal print look and said, ‘try it on.’ I was like ‘oh not now’ but he made me put it on and I just felt so beautiful. I thought, what a gift to be so invested in your creations. To care about the fabrics, how it all looks, and how it makes women feel. He truly cared about that and I said if I ever got the opportunity to design I want to care as much as he does.”

Convid has created many offices now. I wonder what next year will bring.
0  Like

I respect your choice of wardrobe. I respect women who dress this way
1  Like


Lengthy??
Do you even know the meaning of that word??
Before sending out a word you don't know the meaning of, always make proper use of ya dictionary..
And besides is my comment the only comment you've seen...
We are all entitled to our own comment, I don't see my comment affecting you in anywhere...
0  Like

What I Learned From a Sustainable Wardrobe Stylist

All kind of senators materials and wears

This Gaza-Based Designer Is Creating Suiting With a Personal History

Kelly Rowland Wants You To Feel Fabulous While Working from Home