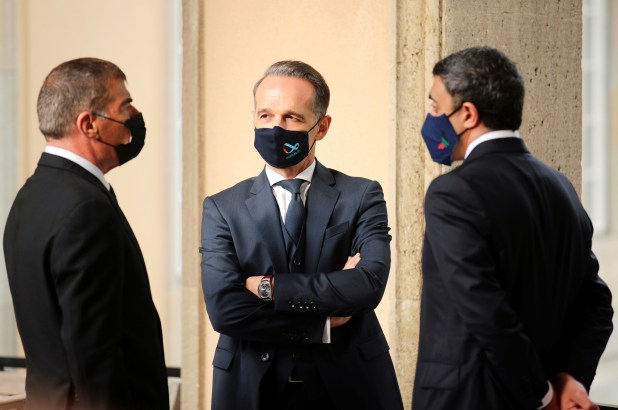 The foreign ministers to Israel and the United Arab Emirates met in Berlin Tuesday as part of both countries’ efforts to normalize relations, Germany’s foreign minister confirmed.

In statements to the press after their meeting, Emirati Foreign Minister Sheikh Abdullah bin Zayed Al Nahyan and Israeli Foreign Minister Gabi Ashkenazi described one another as “my friend” and vowed that their work would continue as part of the US-backed Abraham Accords, which were signed last month at the White House.

Sheikh Abdullah thanked German Foreign Minister Heiko Maas for hosting the gathering, adding that he hoped a “new impetus toward stability and peace” would come from their newfound ties with Israel.

Ashkenazi called their meeting, specifically their visit to the Holocaust Memorial, a “historical moment.”

Sheikh Abdullah added that the memorial “confirms the importance of strengthening the values of tolerance, coexistence and acceptance around the world.”

The three met again later on Tuesday behind closed doors at a secluded government-owned guest house on the outskirts of Berlin.

“The most important currency in diplomacy is trust, and I am personally grateful to both of my colleagues for placing this trust in Germany. We are doing everything we can to be good hosts for the dialogue between the two countries on how to shape their future bilateral relations,” Maas said in a statement on the meeting.

As part of the accords, both nations agreed to recognize Israel’s right to statehood and establish diplomatic relations. The breakthrough also established direct commercial flights and telephone service between Israel and the UAE.

Documents signed at the White House event committed Israel, the UAE and Bahrain to exchange ambassadors and open embassies. Trump said the countries will “cooperate as partners across the broad range of sectors, from tourism to trade and healthcare to security, they’re going to work together. They are friends.”

Newsend Sars: I Was A Victim Of Police Brutality – Fayemi

#endsars: Security Agencies Are Ready For You – Fg Tells Protesters