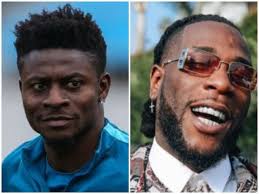 We never know what exactly causes the beef between them and we are as well not ready to elongate the case.

Okay why I am bringing back this matter is because of my uncle that claims Obagoal is worldly recognized than Odogwu.

He emphasized his points saying Obafemi Martins has played in many leagues across the globe which has earned him international level.

“Do you know where music dn carry Burna Boy reach?” I replied to him. Featuring in the World advert of Pepsi with Messi, Pogba is enough to say Oluwa Burna na international celebrity and he’s more popular than Obagoal abi wetin una call ham.

She’s Beautiful, You Love Her, But Can’t Cook – Will You Marry Her?