Hoodlums Steals Obafemi Awolowo’s Glasses From His Statue In Lagos 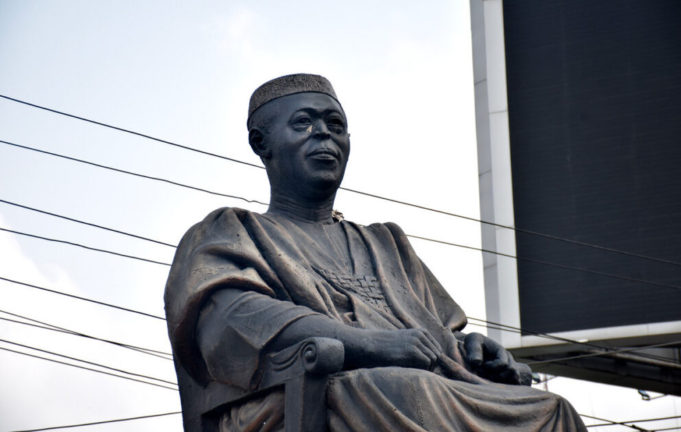 The iconic glasses on late Obafemi Awolowo’s statue have reportedly been removed, following the continuous looting of government and private properties across the country.

The 20-feet statue of the statesman who played a key role in Nigeria’s independence movement, was defaced by suspected hoodlums who were on rampage in Lagos.

The hoodlums removed the statue’s iconic glasses amid attack on some of Nigeria’s symbols of history.

The Awolowo statue was erected during the administration of former Lagos governor Akinwumi Ambode, in recognition of the late nationalist’s contribution to the country’s democracy.

At the time of unveiling the statue, Ambode noted that the statue is meant to be a constant reminder of the need to value the sacrifice of our heroes and strive to uphold and promote the ideals which they stood for.

“This statue is not just about beautifying the environment or serving as a tourist attraction, but more importantly, it is meant to be a constant reminder to all of us and future generations of the need to value the sacrifice of our heroes and strive to uphold and promote the ideals which they stood for. May the labor of our heroes past never be in vain.

Slay Queen And Her Gang Arrested By EFCC, A Day After Bragging On Facebook