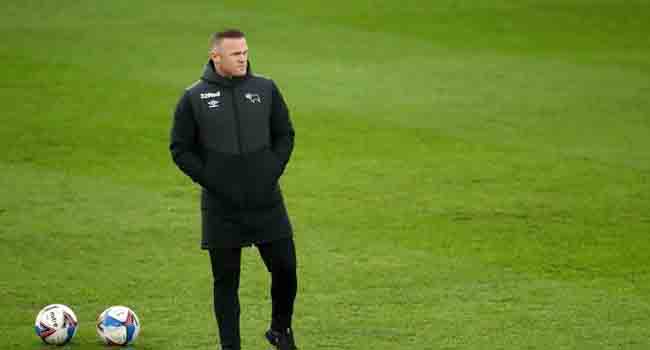 Wayne Rooney has ended his illustrious playing career to take up a job as full-time Derby manager, the Championship club announced on Friday.

Derby confirmed the 35-year-old former Manchester United and England forward had agreed to a permanent deal until 2023, having succeeded Phillip Cocu on an interim basis in November.

“We are delighted to confirm the appointment of Wayne Rooney as our new manager,” Derby County’s Chief Executive Officer Stephen Pearce said in a statement on the club’s website.

“Our recent upturn in results under Wayne was married together with some positive performances, notably the 2-0 home win over Swansea City and the 4-0 victory at Birmingham City.

“During that nine-game run we also dramatically improved their defensive record and registered five clean sheets in the process, while in the attacking third we became more effective and ruthless too.

“Those foundations have provided a platform for the club to build on in the second half of the season under Wayne’s guidance.”

The club statement confirmed that in accepting the manager’s role, Rooney had “elected to call time on his illustrious playing career to fully focus on his job”.

The former United player himself admitted that he was blown away by the potential in the Derby County side.

“When I first arrived back in the United Kingdom I was completely blown away by the potential of Derby County Football Club,” he added. “The Stadium, Training Ground, the quality of the playing staff and the young players coming through and of course the fan base that has remained loyal and supportive.”

REASSURANCES BY SECRETARY OF UNITED STATES AIR FORCE TO NAF