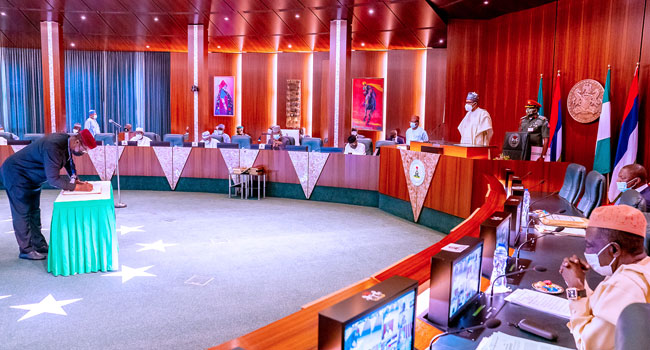 The Federal Government has approved N6.45 billion for the setting up of gas plants in 38 locations nationwide in a bid to enhance the treatment of COVID-19 patients who need oxygen.

Similarly at the meeting, the Health Minister Dr. Osagie Ehanire informed the Council that sequel to President Buhari’s decision to activate the Basic Healthcare Provision Fund based on the National Health Act, N55.1billion was approved in 2018 and that 50% of the sum has since been released to the States and the FCT.

Besides, the Federal Government has also allocated N35billion for 2021 for the Fund.

It would be recalled that the Basic Health Care Provision Fund (BHCPF or “The Fund”) was established under Section 11 of the National Health Act (NHA Act), as the principal funding vehicle for the Basic Minimum Package of Health Services (BMPHS). The Fund serves to increase the fiscal space and overall financing to the health sector to assist Nigeria to achieve Universal Health Coverage (UHC).

Funding of the BHCPF would be derived from contributions including — an annual grant from the Federal Government of Nigeria of not less than one per cent (1%) of its Consolidated Revenue Fund (CRF) — grants by international donor partners; and funds from any other source.

Other updates at the NEC meeting include account balances as of 20th January 2020 given by the Minister of Finance, Budget and National Planning, as follows:

Meanwhile, the Council also received an update from the Vice President who is the Chairman of Council’s Ad-Hoc Committee on Public Engagements regarding the fallouts of the EndSars protests of last year.

In the update, the NEC engagements will focus mainly on:

• Young intellectuals and emerging industry leaders from diverse sectors, students of tertiary and other educational institutions, youths in the Diaspora who are interested in social political developments, entertainers and social influencers, trained artisans etc.

Suspected Bandits Kill Imam Who Spoke Against Their Activities In Kaduna

We must regulate social media — FG

Nigeran Man reportedly sells his kidney to pay for his daughter’s education, but she commits suicide because of her boyfriend