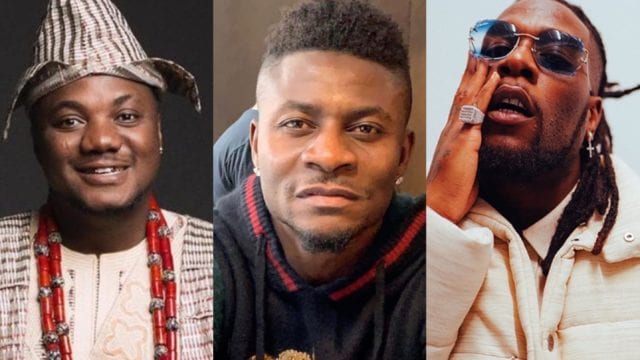 Omo Burna Boys is doing too much in this industry oo 😡😡😡

How can you do this to a fellow musician? I knew something will happen despite the issue been resolved. Burna can’t just settle with someone without actually doing something silly.

We don’t know what transpired between Burna Boy and Obafemi Martins which is popularly known as Obagoal but we are all aware that CDQ called Odogwu out for disrespecting Obagoal.

On the 3rd of March 2021, Pulse Nigeria shared a video of CDQ allegedly wounded by a guy named Richie from Burna Boy’s camp.

According to the report, during the late hours of the 1st of March 2021, indigenous rapper, CDQ was at the club when a confrontation ensued with Burna Boy’s camp, led by Richie. As the matter escalated, CDQ said he was stabbed by Burna Boy’s camp and left bloodied.

When CDQ’s camp heard about his maltreatment at the club, they stormed the same club and a fresh fight broke out with Burna Boy’s camp.

This happened after the earlier incident with Burna Boy’s camp – this led to others being allegedly wounded.

In an audio obtained by Pulse Nigeria, CDQ can be heard saying in Yoruba 👇

“It’s Burna Boy, he and his squad members, the one named Richie. He was rushed to the hospital as well because he also bled yesterday.

I was angry because I kept wondering if Burna Boy was mad since we aren’t in London or Port Harcourt.I collected drip and blood transfusion yesterday and we were later taken back to the club so everyone would see that there was now peace.”

Why Is Burna Boy Fighting Everyone?

It can be recalled that the Grammy-nominated singer was recently involved in a very messy fight with Davido and his crew in late 2020 in Ghana.

He was also recently called out by Ghanaian dancehall artiste, Shatta Wale.

We pray God touches Burna Boy’s heart, this is getting out of hand 🙏

SAVAGE!! See The Response Someone Gave To Peter Okoye (P’square) When He Said All Tribes Should Unite In Nigeria

Headies Awards 2020 Nominees List: Who Are You Supporting? (SEE ALL CATEGORIES)