A Mild Tribute To Fela

Forty two years ago, I was a student at Ogun State Polytechnic studying Mass Communication. I cannot remember all the details but it was Abaj (Akin Johnston) and I who volunteered to present a letter of invitation from the Dean of our faculty to Fela Anikulapo Kuti. The letter asked Fela to come and give a free lecture at Ogun State Polytechnic. By the way, I have known the Kuti  family since Yomi Ogundipe and I attended Compro.  Later, Fela moved to Ikeja, a walking distance from our house on Unity Road, so Femi, Yeni, and Sola Anikulapo Kuti are my homies. Anyway, Fela accepted the invitation to come and give a lecture at 3pm I think. There was panic when at 5pm Fela was a no show. Eventually, Fela came with two coasters filled with his queens and entourage. It was unbelievable. The campus went wild. Our Mass Communication classroom was fully packed. Fela lectured about colonialism, corruption and politics. During the lecture, a voice said, "Na Lie" ! Yikes! I held my breadth, Fela, stopped and asked who said Na Lie, and the culprit raised his hand. Fela told his boys to carry the culprit out of the classroom. The culprit was carried shoulder high out and I saw who it was. Guess what? The culprit was the dean of our faculty that gave me the letter to invite Fela! OMG! Fela finished his lecture, left and was night to remember. We were so proud to have Fela on campus. Imagine coming for free with his entourage. What a class act. After Fela left the campus, not knowing what to expect, I was invited to the staff room to meet the dean. The dean was ecstatic, and told me he said Na Lie to fire Fela up. The dean said he was delighted with Fela's response to have him carried out.  I am writing this in a rush and please forgive me for not remembering the name of the dean and Iam sure my fellow class mates will as I left Ogun State Polytechnic shortly after this incident for America. May Fela's soul continue to rest in power. Yes, I have omitted a lot in this story and it was not intentional. Total respect for Fela and the dean. They both created a wonderful memory. Rest in Power, Baba 70! Fela Kuti 15 October 1938 to 2 August 1997. Legend! 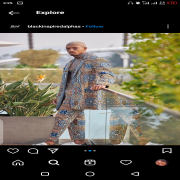 I Found A Flower By Mc Lively