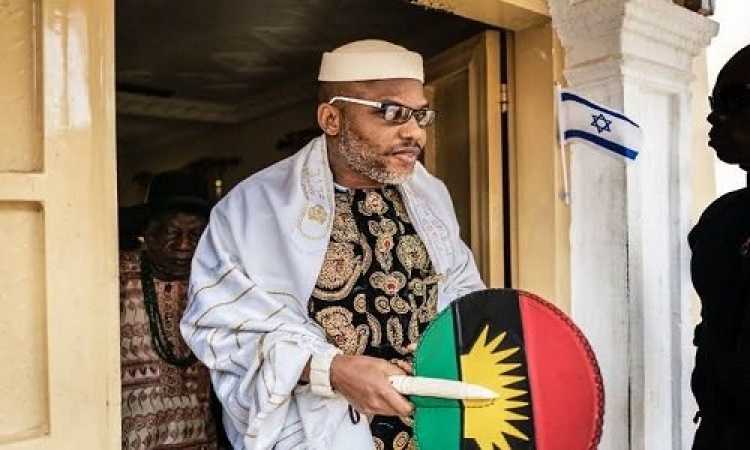 A coalition of 75 Northern groups under the aegis of Northern Consensus Movement has announced a reward of N100 million persons who can produce the supreme leader of the Indigenous People of Biafra, Mazi Nnamdi Kanu, for the continuation of his trial for alleged treason.

The groups, which disclosed this at a press briefing in Abuja, the nation’s capital on Thursday evening, accused Kanu and the Eastern Security Network (IPOB’s militia wing) of masterminding the recent spate of attacks on Northern communities in the Southeast via what they called ‘hate speech’.

Speaking on behalf of the Coalition, Dr. Awwal Abdullahi Aliyu, urged the United States of America, the United Kingdom,  and the European Union to facilitate Nnamdi Kanu’s repatriation to Nigeria to face the charges against him.

Aliyu said, “The Northern Consensus Movement, an amalgamation of more than 75 civil society groups of Northern extraction, has taken it upon ourselves, as active citizens of this country, Nigeria, to state in unequivocal terms that:

“We are declaring Nnamdi Kanu wanted for crimes against humanity and for instigating the killing of innocent Northerners in the southeast via his hate speech.

“We want him to answer for the killing and destruction of Northerners residing and undertaking lawful businesses in the southeastern part of Nigeria.

“So, we are placing a bounty of N100m as an offer to anyone who can produce him alive, hale, hearty, and uninjured to us for onward delivery to the security agencies for the continuation of his prosecution.

“We call on both the US, the UK, and the EU, a champions of democracy, rule of law, and freedoms of speech and expression to kindly and humble respect Nigeria’s sovereignty and facilitate the repatriation of Nnamdi Kanu to Nigeria so that he can face his treason, and possibly a fresh terrorism and genocide charges against innocent citizens of Nigeria.” (Vanguard)

This Town Has A Shortage Of Men, Lot Of Women Are Looking For Men To Love